Getting iomega storcenter ix2 back to life 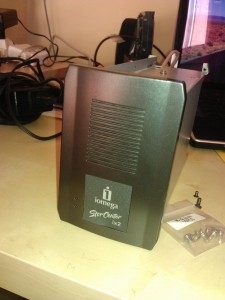 A friend of mine was using this NAS for some time. For three+ years to be more precise. And he was considerably happy given the price he paid for it. A week ago he called me telling the thing is dead and he has run out of ideas. He is a smart guy but he is not into computers. So I picked the thing up to see what’s inside and if it’s worth wasting time with or just buy another one.

So, first things first, hook it up to my notebook, setup a local dhcp server and start tcpdump. It kinda seems to boot. Asks for IP, gets it and then just sits there periodically sending broadcast UDP to the port 2080. The packets seem to be some binary protocol with only “m1” and mac address readable as strings. So it seems to be looking for some manager. Makes sense. But couldn’t find one the NAS is looking for. The “owner” of this product line has changed and probably more than once and there are all kind of software and versions iomega support offers to download none listening on udp/2080. Oh well. Next step then.

Disks out, just to be sure, checking the S.M.A.R.T. data:

that is on both drives after as much as:

That is. as usual, we are slightly off the 3 years limited warranty and things start to die. And my friend had the bad luck (not unheard of) to get the both disks kaboom at the same time. For the note, these are the original 1TB Seagate Barracuda 7200.11 ST31000333AS iomega stuck into the nas.

However, the disks are spinning still and I can peak into the data. The layout goes like this:

and the Linux partitions are two RAID devices. The first one is smaller so we can assume it is where the system stuff should sit. What does md driver thinks about it?

makes sense, we’ve got a small mirror and a big linear here. Mounting the mirror … Ughm, on both drives it is a virgin ext2 with only lost+found showing up. 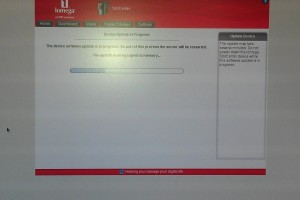 After an hour of googling, and mind you, with ix2 being the first of the line and a bunch of variations followed, it was not a simple task. I’ve found this blog post by a French collègue (my eternal gratitude) who saved and shared original files from his NAS. While waiting the files to download I’ve copied the partitions table onto a new disk, created the raid1 on first and mkfs’ed ext2 on it. Mounted, extracted the files and the NAS started. Power off, add another empty drive, boot and voilà! like nothing has ever happened to the thing.

If someone is looking for the files, what I’ve downloaded form the mentioned blog post in french is mirrored here on my box and My OneDrive, which is a clean firmware 2.0.15.43099 snapshot from the raid1 partition. Just in case the post in french ever goes down.

19 Thoughts on “Getting iomega storcenter ix2 back to life”